One day, far, far out at sea, Little Wave began his journey.

It seemed difficult to Little Wave.

“It is difficult here,” thought Little Wave. “I am far, far out at sea and I am all alone. The shore is very far and I may break before I get there.”

Deep Deep Blue heard Little Wave and tried to reassure him, but Little Wave was too young to hear him.

“Well, I will have to continue as best I can,” thought Little Wave. And that is what he did.

The fish were dashing, turning and diving to avoid a bigger fish that was chasing them.

“Great Wave?” thought Little Wave. “They can’t mean me.” But they did.

“Oh Great Wave,” they said. “Please, please help us. We are in terrible danger. Let us ride inside you and take us out of danger.”

Little Wave was happy to help. And he took the fish away from danger.

“It’s great to help,” thought Little Wave. “You can live inside me if you like, and we can keep each other company.”

The starfish was shining, glittering and dazzling.

Little Wave had never met a starfish before and he was in awe of her beauty. The starfish was clinging to a buoy.

“Beautiful creature,” said Little Wave, “why do you cling to this floating thing?”

“Don’t you know?” said the starfish haughtily. “I am from the very stars above. My connection is not with the water but with the heavens themselves. When I die I shall rise into the heavens above and take my place in the Mighty Night Sky. The Mighty Night Sky has spoken to me and told me what to do. I have little time for this ocean of yours.”

“Little time for this ocean,” thought Little Wave. “How extraordinary. Maybe if I follow the words of the Mighty Night Sky then I too can go to join the star-fish up above.”

Little Wave did what he was told and sent his friends the fish away.

“But we will once again be in danger,” said the fish.

“I am sorry,” said Little Wave, “but I have my duties to perform now and the Mighty Night Sky is so great and mysterious that I must obey.”

So the fish went away. This made Little Wave sad.

Night after night Little Wave studiously sang the Mighty Night Sky’s praises. After a long time Little Wave began to wonder if what the starfish had told him was really true.

“The night sky is dark and indifferent…and I am so unhappy,”’ thought Little Wave. “I know, I will find the fish again and see if I can help them.”

The gull was whirling, twirling, beguiling above him.

Little Wave had never met a gull before and he was in awe of his flying power.

“What are you?” asked Little Wave.

“The shore?” said the gull. “You seek the shore? There is no place for you, wave, on the shore. The shore is for dry-landers only. You shall certainly perish when you hit the shore, insignificant little wave.”

Little Wave was very sad and very afraid when he heard this. Lord of the Air was so powerful and knowledgeable and he was so little and insignificant. From this fear and sadness, Little Wave decided that if he was going to smash against the shore and perish then nothing really mattered to him.

Deep Deep Blue knew that Little Wave was afraid and tried to let him know that he was there for him, but Little Wave could not hear him because he was too sad and too scared.

Now Little Wave was truly unhappy. He did not have the fish and he did not even have the song for the night sky.

“What’s the point of anything?” thought Little Wave. “If I smash on the shore today or tomorrow – it’s all the same to me.”

Deep Deep Blue heard Little Wave and wanted to tell him he was there for him ,but Little Wave was lost in his own thoughts.

After what seemed like a long, long time Little Wave awoke and remembered the fish. 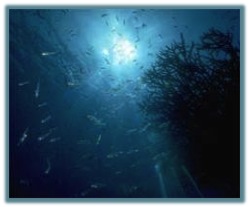 “I had been very happy with the fish” thought Little Wave. “Even if I will smash into nothingness and die against the shore, I can still help the fish.”

Little Wave found the fish and invited them to return. 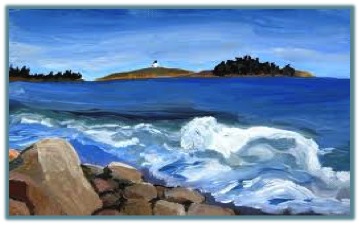 “I feel strange”, he thought. “Something’s happening to me. I feel like I am getting faster. And thinner. And what’s that coming to meet me?”

“We have to leave you now,” said the fish.“It is the shore that is coming to meet you and we may not enter there. Thank you for your help Little Wave”. And the fish swam off into the deeper water.

Little Wave was very scared now, and he barely heard the fishes’ farewell. He saw the shore getting closer and closer.

“This is it”, he thought. “I enjoyed being with the fish. Now I will smash into nothingness – or maybe my time singing to the night sky will help and I will become a star.”

The shore hurtled towards him.

Little Wave smashed against the shore and he found himself…home.

“I am home?” said Little Wave.

And somewhere, far, far out at sea, a little wave began its journey…